Samsung announced today that it has begun manufacturing 64GB and 128GB SSDs based on a less-expensive type of NAND flash known as MLC. The company also said it was still on track to deliver a 256GB version by the end of this year. 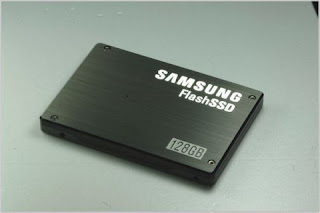 Samsung has been shipping first-generation PC drives based on SLC, or single-level cell, NAND flash for some time. Dell and Alienware were the first OEMs to begin offering these 64GB drives in some laptops starting last September. But they’ve been slow to catch on, in part because they are so costly relative to conventional hard disk drives. That is why the shift to MLC is significant. MLC, or multi-level cell, NAND flash currently stores two bits of information in each cell, which effectively cuts the cost of the chips nearly in half. Samsung is shipping 1.8- and 2.5-inch drives in both capacities.

Read more about it here.