WASHINGTON (CNN) -- Sen. Hillary Clinton will officially end her campaign for the presidency by the end of the week, multiple sources told CNN.

A top Clinton fundraiser says it is expected to happen on Friday. Obama and Clinton were in Washington on Wednesday to each address the influential American Israel Public Affairs Committee. The candidates ran into each other at the AIPAC conference and had a brief chat, Obama spokeswoman Linda Douglass said.

"She's an extraordinary leader of the Democratic Party and has made history alongside me over the last 16 months. I'm very proud to have competed against her," Obama told the Israel lobbying group. Obama became his party's presumptive nominee Tuesday and will be looking to unite Democrats divided by the long and contentious primary season.

"I am very confident how unified the Democratic Party is going to be to win in November," he said in a Senate hallway Wednesday. 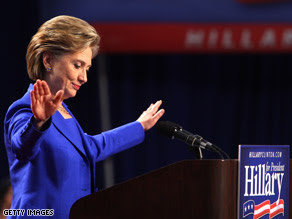